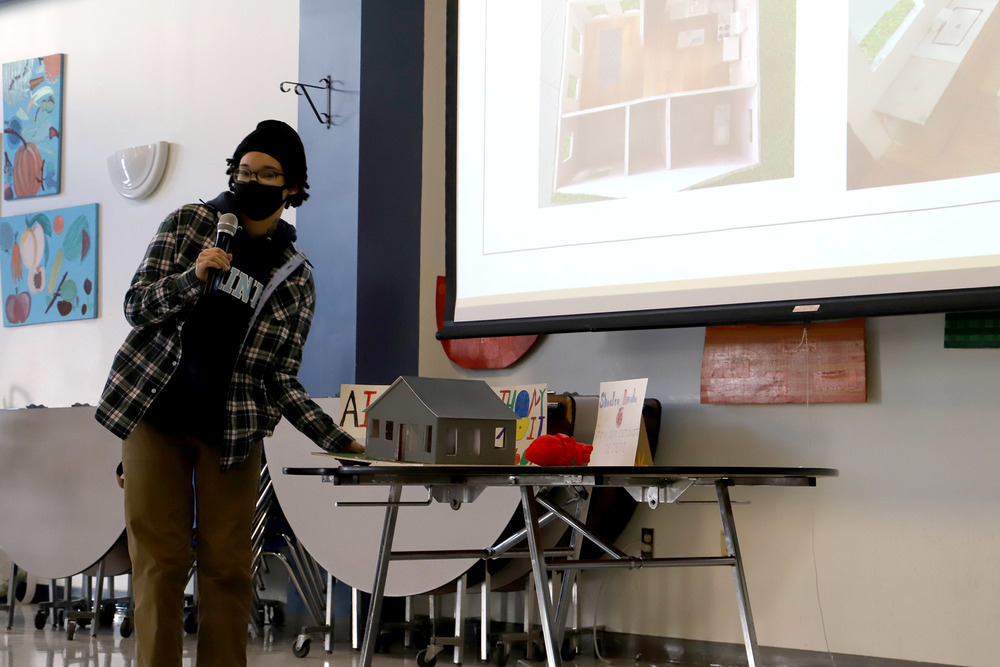 Bath, ME (March 11, 2021) - Eighth graders at Bath Middle School (BMS) are preparing for high school with “Journey to Success,” a cross-disciplinary learning initiative (called an “expedition”) with a presentation component. Students were recently asked to identify something they are passionate about and present the topic in front of their classmates.

“Middle school is the transition between ‘everything is possible’ and narrowing your field,” said science teacher Monica Wright, describing the importance of helping students identify their passions so that they can pursue them in high school and beyond. “Before winter break, we helped students make their own ‘interest bracket.’ On one side they put things that they think about often; things that jazz them up. On the other side they put things that make them mad. Going through the bracket helped them articulate things they are passionate about.”

Presentations took place on February 25 and 26 in the BMS cafeteria – it was the first time that some students had spent class time together since the pandemic started. Topics included everything from suicide prevention to traditional chip boat design to the aerodynamics of flight. Shealyn Brochu filmed herself dissecting a pig’s heart and demonstrated the inner workings of the organ in her presentation, “How can the heart be cured?” Gaffney McDonough, who had been helping his father with the restoration of a Ford Model A, documented his repair of the car’s signature “ahooga” horn. Belle Watson wrote and recorded a heartfelt song about discrimination.

Despite the breadth of topics, there was one common thread: the students’ enthusiasm and pride in their work.

“Every student put themselves out there,” said Wright. “There were so many moments where they had to let themselves be vulnerable. In the end, their perception about the project went from, ‘This is something I have to do,’ to ‘This is something I’m really passionate about doing.’ Every kid did that, and that’s what’s so important to me.”

Wright said the passion projects could not have been done without the one-on-one support of ed tech Roman Quinn, who joined BMS this year. Quinn discovered a 3D printer in the school’s library and taught himself how to use it so he could help students create unique props for their presentations. For example, when student Brady Wallace wanted to make a presentation on turbochargers vs. superchargers, Quinn helped him locate a design and print a model turbocharger to show his class. Quinn even lent his own car to the passion process when student Jackson Murray wanted to learn how to change a tire.

“I filmed Jackson changing the tire at BMS,” Quinn said. “It turns out that he was born to be in front of the camera – he was so personable. So determined. The whole experience was awesome.”

Quinn, who worked in finance before switching careers, said projects like this make him wish he had become a teacher “right out of the gate.”

“I know what it’s like to watch the clock at work. Now, every day I leave work, I’m still energized. I have just as much fun as the kids, if not more,” he said.

The final step in the eight grade’s “Journey to Success” expedition will come at the end of the year when students present evidence to a panel of judges that they are ready to start high school; a process guided by English language arts teacher Adelle Carter. But these have students already accomplished something that they can carry forever: finding and sharing their passion. 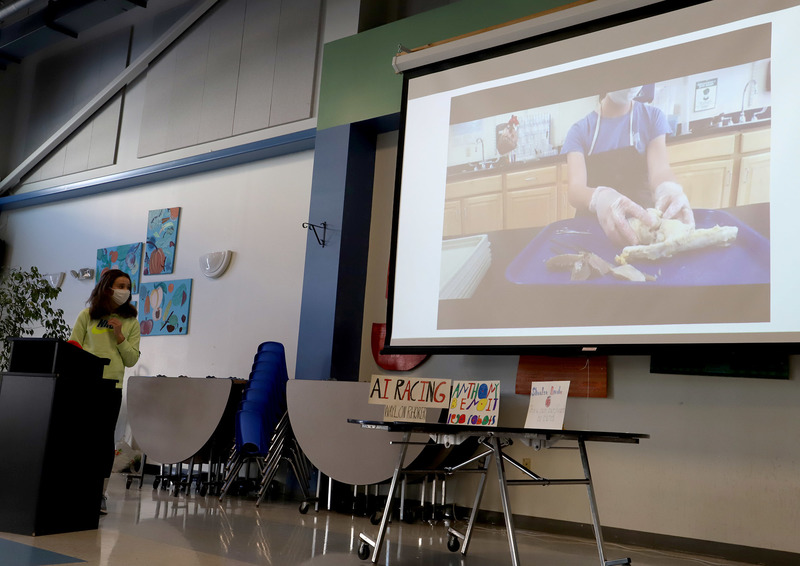 Shealyn Brochu shows a video where she dissected a pig heart to show the innerworkings of the organ.