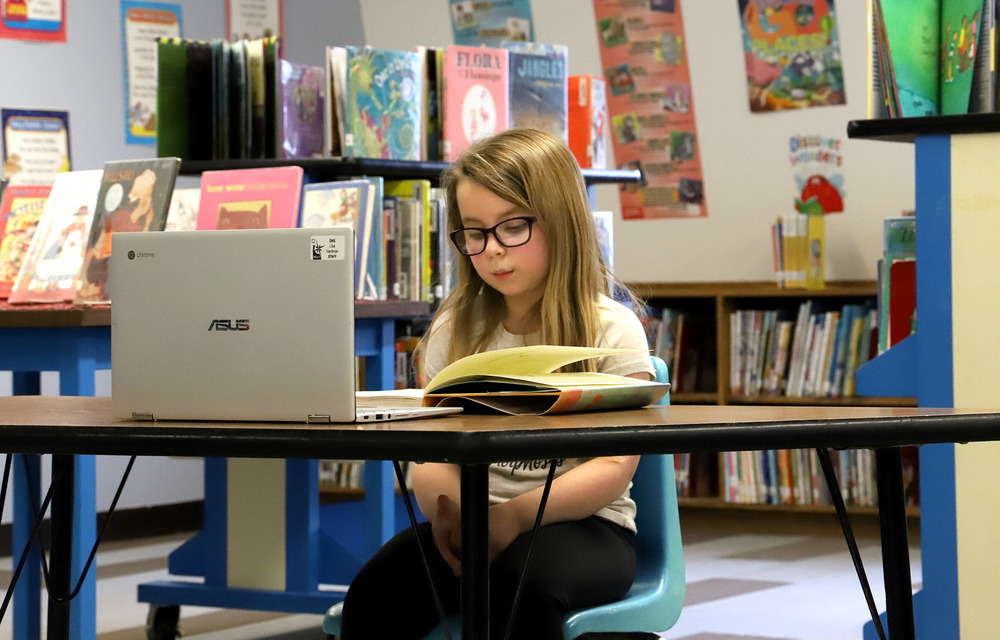 Bath, ME (April 12, 2021) - Thursday, April 29 is Poem in Your Pocket Day, an event promoted by the Academy of American Poets in recognition of National Poetry Month. In the past, students at Dike-Newell Elementary School celebrated by exchanging poems during Buddy Reading time, but social distancing precautions forced a change in plans. This year, they are sharing their favorite poems by video.

Librarian Lisa Hardman and Kindergarten teacher Kathryn Wetzel began working with teachers to coordinate the project. At least four students from every classroom were selected to read in front of the camera. The videos will be shared in the school’s hallway television and on virtual classroom webpages throughout the month.

Second graders Nora Barclay and Beckett Sinclair arrived in the Library on the morning of April 5 to make their recordings. Both students selected work from Jack Prelutsky: Beckett shared “My Backpack Weighs a Thousand Pounds” by memory, and Nora read verses from I’ve Lost My Hippopotamus.

“I chose I’ve Lost My Hippopotamus because it involves my aunt’s favorite animal and it’s very funny,” Nora said.

“The kids really seem to love poems with animals,” said Hardman. “Bow Wow Meow Meow by Douglas Florian is a favorite, and Shel Silverstein is a popular author, too.”

Hardman spent the first week of April introducing students to basic poetry formats, and then helped them pick a poem to perform. Students used Hardman’s laptop to record their pieces so that she could edit and share the clips on Brightspace, the district’s online learning platform.

“Some of the kids really love to be recorded and seeing themselves up on the screen, but it was also nice to watch other kids, who were scared at first, find their confidence and blossom,” she said. “They practiced hard and did a great job.”

National Poetry Month was established by the Academy of American Poets in April of 1996 to remind the public about the integral role poets have played in our culture. Poem in your Pocket Day, an initiative of the Office of the Mayor of New York City, was adopted by the academy in 2008.